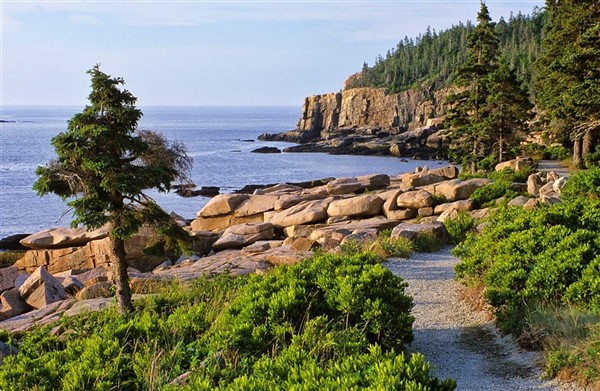 Mount Desert Island is the largest island off the coast of Maine with 108 square miles, and the second largest (behind Long Island, New York) on the eastern seaboard of the United States. Widely known as the home of Acadia National Park and the town of Bar Harbor, it draws millions of visitors each year to it's quaint downtown, rocky coast and magnificent Acadia National Park. Bar Harbor is known for its stunning coastal beauty, its many yachts and lobster boats, and its expansive ocean views. Our hotel is the Atlantic Oceanside Resort, situated on 12 acres of oceanfront property overlooking Frenchman's Bay.  The resort is located just one mile from Acadia National Park and the shops and restaurants of historic downtown Bar Harbor, and has stunning ocean views of Frenchman Bay, modern amenities, indoor and outdoor pools.

Travel to Bar Harbor, Maine and our oceanfront hotel, the Atlantic Oceanside Resort. We’ll take a two-hour, fully narrated Acadian Nature Cruise from the Resort's docks in search of eagles, porpoises, seals, and other interesting marine life and birds. We’ll cruise on Frenchman Bay and enjoy the breathtaking scenery of coastal Maine, the islands of Frenchman Bay, and the shoreline of Bar Harbor. A delicious DownEast Maine Lobster Dinner is included at the Resort. (D)

Enjoy the day at leisure - relax on your balcony or by the water, or take the complimentary Bar Harbor Trolley from the hotel to shop downtown or walk the famous Shore Path in Bar Harbor, which begins at the Town Pier and goes past the Bar Harbor Inn, then  continues South for about 1/2 to 3/4 of a mile along the eastern shore of Mount Desert Island. Originally created around 1880, people from all over the world have walked on this path while enjoying the ocean air, sailboats, and sounds ever since. The trolley will also take you to Acadia National Park if you would like to explore the park independently or take a carriage ride through the park.  Trolley information will be handed out on the bus. (B)

No trip to Bar Harbor would be complete without a visit to Acadia National Park.  Its landscape is marked by woodland, rocky beaches and glacier-scoured granite peaks such as Cadillac Mountain, the highest point on the United States’ East Coast.  Our 2 1/2 hour tour will feature three stops within Acadia National Park, the summit of Cadillac Mountain, Thunder Hole (an ocean-side stop), and Sieur De Monts Spring (Wild Gardens of Acadia). You'll have approximately 20 minutes at each stop for photos and to enjoy the spectacular views from the park.  The tour will emphasize the history of Bar Harbor and Acadia, the geology, the wildlife, and much more.  We'll have time for lunch (on own) in downtown Bar Harbor before we head back to the Cape. (B)