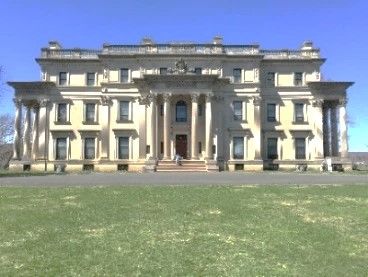 Join us for this trip to upstate New York's Hudson Valley, where we will see magnificent mansions from the Guilded Age and visit the Culinary Institute of America!

Travel to New York's beautiful Hudson River Valley and enjoy time at the historic Kingston waterfront for lunch and light shopping before our two-hour narrated cruise on the Hudson River aboard the Rip Van Winkle.  On our scenic, cruise, we will pass historic lighthouses, waterfront mansions, and some of the river’s most unique and fascinating locations.  As we cruise, the crew will tell us about the rich history of the area and the families that built their mansions along the river. We'll stay at the Holiday Inn Express in Poughkeepsie for two nights.  A delicious waterfront dinner at Shadows on the Hudson ends our day. (D)

Bring your cameras, as a stunning panorama unfolds high above the Hudson River when we take a stroll on the Walkway over the Hudson River!  We'll take the 21-story glass elevator up to the walkway where we will meet our guide for a walk 212 feet above the Hudson River for scenic views both north to the Catskills and south to the Hudson Highlands.  Our local guide will tell us the history of the bridge and points of interest along the waterfront.  Then, we’ll take a tour of the modest summer cottage that was a favorite retreat of Eleanor Roosevelt, Val-Kill; see the film "Close to Home" and the permanent exhibit, "Eleanor Roosevelt and Val-Kill: Emergence of a Political Leader." The only National Historic Site dedicated to a First Lady, Val-Kill serves as a window into Eleanor Roosevelt's public and private life.  Enjoy a delicious lunch (on your own) at the Everready Diner before we get a glimpse of life during the Gilded Age on our tour of the Vanderbilt Mansion, a remarkably complete example of a gilded-age country place, illustrating the political, economic, social, cultural, and demographic changes that occurred as America industrialized in the years after the Civil War. For nearly two centuries, Vanderbilt Mansion has been home to socially prominent New Yorkers. A superb example of its type, the mansion represents the domestic ideal of the elite class in the late nineteenth-century, and gives us a glimpse of estate life, the social stratification of the period, and the world of the American millionaire during the Gilded Age.  We'll enjoy dinner in Poughkeepsies Little Italy at the Italian Center. (B,D)

We'll learn about Franklin D. Roosevelt, Eleanor Roosevelt, the New Deal and World War II on our visit to the FDR Presidential Library & Museum.  On April 12, 2020 the nation marks the 75th anniversary of Franklin Roosevelt’s death. To commemorate this important anniversary, the Roosevelt Library will mount an exhibit that recalls the momentous final months of his life and presidency. It explores FDR’s vision for the future of his nation and the world—and the campaign he undertook during his last months to secure it. Those months were a time of desperate battles and mounting casualty lists as the Allies closed in on Germany and Japan and there was a growing wariness and disagreement between the Allied coalition. Afterwards, we'll visit The Culinary Institute of America, a private college and culinary school specializing in culinary, baking, and pastry arts education. We'll enjoy a delicious 3-course lunch at their French-inspired restaurant Bocous and  take a student-led tour of the Culinary Institute, where you will look through the windows to see the teachers & students at work in the kitchens.  You'll have time to browse the gift shop filled with cookbooks, souvenirs and culinary gadgets, and pick up a snack in the cafe to enjoy on the ride back to the Cape. (B,L)