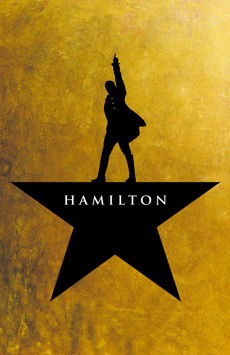 See the hit musical sensation, Hamilton, when it comes to Boston

HAMILTON is the story of America then, told by America now. Featuring a score that blends hip-hop, jazz, R&B and Broadway, HAMILTON has taken the story of American founding father Alexander Hamilton and created a revolutionary moment in theatre—a musical that has had a profound impact on culture, politics, and education.

With book, music, and lyrics by Lin-Manuel Miranda, direction by Thomas Kail, choreography by Andy Blankenbuehler, and musical supervision and orchestrations by Alex Lacamoire, HAMILTON is based on Ron Chernow’s acclaimed biography. Hamilton received a record-setting 16 Tony nominations, ultimately winning 11 total including Best Musical.  It has additionally won Grammy®, Olivier Awards, the Pulitzer Prize for Drama, and an unprecedented special citation from the Kennedy Center Honors.

We have left center orchestra seating for the 7:00 PM show at the Boston Opera House, there will be free time for dinner at the Prudential Center before the show.

*Gratuity for the Tour Escort and Bus Driver

$75 per person deposit due upon reservation, balance due 45 days prior to tour.  Non-refundable unless your ticket is resold.

Cancellation Protection is available for this trip for $14.00 per person